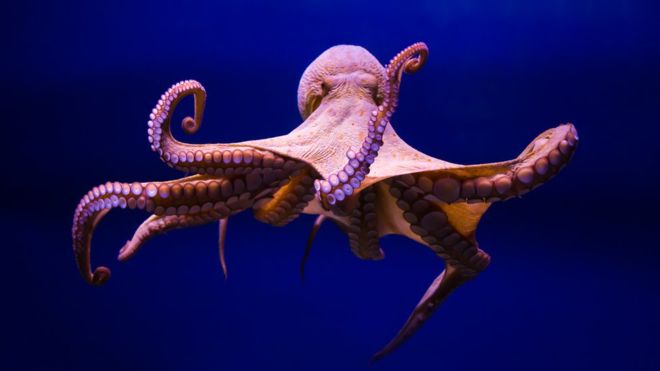 Posted on May 20, 2019May 19, 2019 by The Crumby Vegan Posted in For the AnimalsTagged AnimalCruelty, GoVegan, NobodyWantsToHurtAnimals, Octopus, Sadism, TheCrumbyVegan, Vegan

This article has been really painful to write.

Normally I’m numb to stories about animal cruelty. If I let everything effect me then I’d be an emotional wreck. However there was one story that hit hard. The story about the octopus.

In Asia, eating live animals is a delicacy. Some examples of animals that are eaten alive are fish, frogs and octopuses. Recently there was a video published showing a woman (creating content for her video blog) attempting to eat a live octopus. The octopus tries to get away, sucks on to her face and rips her skin. You can find the video here.

You have to be a very sadistic person to enjoy the slow suffering and death of an animal. 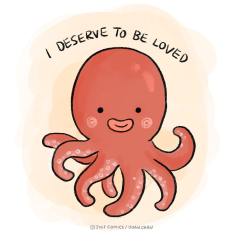 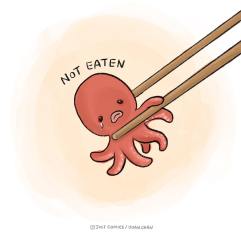 As much as I don’t think octopuses can cry (as implied above), can you imagine the fear and anxiety that an animal would go through during this ordeal? Imagine being completely defenceless and having your arms and legs slowly cut off. Getting ready for the next excruciating moment and waiting (maybe even hoping) for death.

In an interview, cephalopod expert Jennifer Mather, PhD commented on what an octopus experiences as it is cut into pieces and eaten alive:

It’s probable that the octopus’s reaction to pain is similar to a vertebrate. They can anticipate a painful, difficult, stressful situation—they can remember it. There is absolutely no doubt that they feel pain. The octopus has a nervous system which is much more distributed than ours. If you look at us, most of our neurons are in our brain, and for the octopus, three-fifths of its neurons are in its arms.

If you’ve got pieces of arm, because there’s so much local control, they might react to the painful stimuli that they get, but they’re probably not exactly “feeling pain,” because they’re disconnected from the brain. But the octopus, which you’ve been chopping to pieces, is feeling pain every time you do it. It’s just as painful as if it were a hog, a fish, or a rabbit, if you chopped a rabbit’s leg off piece by piece. So it’s a barbaric thing to do to the animal.

Back in October 2017, I wrote a post called Nobody Wants To Hurt Animals. When I wrote this article, I genuinely believed that everyone ate meat because they’ve been brainwashed into thinking that animals (farmed for meat) are humanely slaughtered. However, this story has taught me that sadistic, evil people actually exist and take pleasure in the suffering of innocent animals. Don’t be one of them.

Also, if you like to eat dead animals, remember they were alive once too. They were once transported to a slaughter house where they could smell death before they entered. They were once standing in a line waiting to get a bolt to the head. They were once shivering with fear before they were killed. You’re not a saint just because you don’t eat live animals but you are better than the creepy jerks that do, at least in my opinion.

38 thoughts on “The Octopus”